Blog > What is Bells palsy? 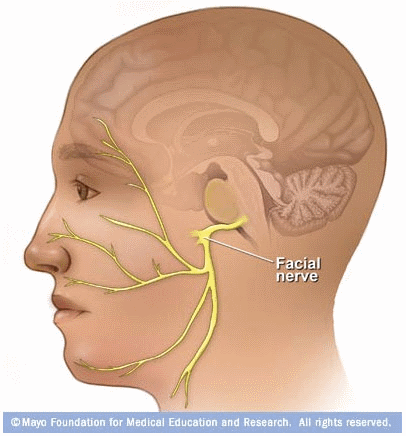 What is Bells palsy?

Bell’s palsy is named for Sir Charles Bell, a 19th century Scottish surgeon who was the first to describe the condition. The disorder, which is not related to stroke, is the most common cause of facial paralysis. Generally, Bell’s palsy affects only one of the paired facial nerves and one side of the face, however, in rare cases, it can affect both sides.

Bell’s palsy is a form of temporary facial paralysis resulting from damage or trauma to the facial nerves. The facial nerve-also called the 7th cranial nerve-travels through a narrow, bony canal in the temporal bone in the skull, beneath the ear, to the muscles on each side of the face. For most of its journey, the nerve is encased in this bony shell.

Each facial nerve directs the muscles on one side of the face, including those that control eye opening and closing, and facial expressions such as smiling and frowning. Additionally, the facial nerves carry nerve impulses to the lacrimal or tear glands, the saliva glands, and the muscles of a small bone in the middle of the ear called the stapes. The facial nerve also transmits taste sensations from the tongue.

When Bell’s palsy occurs, the function of the facial nerve is disrupted, causing an interruption in the messages the brain sends to the facial muscles. This interruption results in facial weakness or paralysis.

Because the facial nerve has so many functions and is so complex, damage to the nerve or a disruption in its function can lead to many problems. Symptoms of Bell’s palsy can vary from person to person and range in severity from mild weakness to total paralysis.

These symptoms may include twitching, weakness, or paralysis on one or rarely both sides of the face.  Other symptoms may include drooping of the eyelid and corner of the mouth, drooling, dryness of the eye or mouth, impairment of taste, and excessive tearing in one eye. Most often these symptoms, which usually begin suddenly and reach their peak within 48 hours, lead to significant facial distortion.

Other symptoms may include pain or discomfort around the jaw and behind the ear, ringing in one or both ears, headache, and loss of taste, hypersensitivity to sound on the affected side, impaired speech, dizziness, and difficulty eating or drinking. Bell’s palsy occurs when the nerve that controls the facial muscles is swollen, inflamed, or compressed, resulting in facial weakness or paralysis. Exactly what causes this damage, however, is unknown.

Most scientists believe that a viral infection such as viral meningitis or the common cold virus causes the disorder. They believe that the facial nerve swells and becomes inflamed in reaction to the infection, causing pressure within the temporal bone canal and leading to ischemia (the restriction of blood and oxygen to the nerve cells).  In some mild cases (where recovery is rapid), there is damage only to the myelin sheath of the nerve.  The myelin sheath is the fatty covering – which acts as an insulation on nerve fibers in the brain.

Bell’s palsy affects each individual differently.  Some cases are mild and do not require treatment as the symptoms usually subside on their own within 2 weeks.  For others, treatment may include medications and other therapeutic options.  In other cases of facial palsy – if an obvious source is found (e.g., infection) then treatment is directed as needed.

Recent studies have shown that steroids such as the steroid prednisone — used to reduce inflammation and swelling –are effective in treating Bell’s palsy.  Other drugs such as acyclovir — used to fight viral herpes infections — may also have some benefit in shortening the course of the disease.  Analgesics such as aspirin, acetaminophen, or ibuprofen may relieve pain.  Because of possible drug interactions, individuals taking prescription medicines should always talk to their doctors before taking any over-the-counter drugs.

Another important factor in treatment is eye protection. Bell’s palsy can interrupt the eyelid’s natural blinking ability, leaving the eye exposed to irritation and drying.  Therefore, keeping the eye moist and protecting the eye from debris and injury, especially at night, is important.  Lubricating eye drops, such as artificial tears or eye ointments or gels, and eye patches are also effective.

Physical therapy to stimulate the facial nerve and help maintain muscle tone may be beneficial to some individuals.  Facial massage and exercises may help prevent permanent contractures (shrinkage or shortening of muscles) of the paralyzed muscles before recovery takes place. Moist heat applied to the affected side of the face may help reduce pain.

Other therapies that may be useful for some individuals include relaxation techniques, acupuncture, electrical stimulation, biofeedback training, and vitamin therapy (including vitamin B12, B6, and zinc), which may help restore nerve function.

In general, decompression surgery for Bell’s palsy – to relieve pressure on the nerve – is controversial and is seldom recommended.  On rare occasions, cosmetic or reconstructive surgery may be needed to reduce deformities and correct some damage such as an eyelid that will not fully close or a crooked smile.