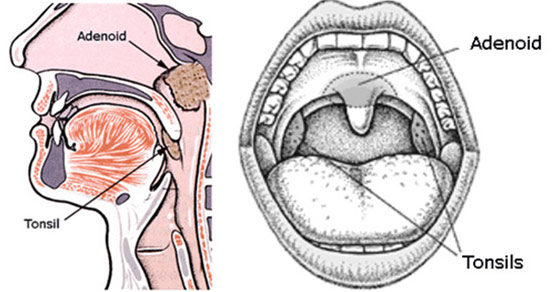 The tonsils are two clumps of tissue, on either side of the throat, embedded in a pocket at the side of the palate (roof of the mouth).  The lower edge of each tonsil is beside the tongue – way in the back of the throat.

Each tonsil has pits on its surface (crypts) that go into the tonsil. During eating and drinking the tonsils are pushed together by the throat muscles and small particles of food may lodge in the tonsil crypts – potentially leading to infection.

The adenoids are a single clump of tissue in the back of the nose (nasopharynx).  They are located on the back wall of the throat (pharynx) about two centimetres above the uvula (the little teardrop shaped piece of tissue that hangs down in the middle of the soft palate).

What function do the tonsils and adenoids serve – aren’t they important?

The tonsils and adenoid are mostly composed of lymphoid tissue, which is found thoughout the gastointestinal tract and on the base of the tongue.  Lymphoid tissue is composed of lymphocytes which are mostly involved in antibody production – since we generally consider antibody production to be a good thing, many studies have been performed to try to clarify the importance of the tonsils, and there seems to be no adverse effect on the immune status or health of patients who have had them removed.

Any noticable effect has generally been positive and it appears that the tonsils and adenoids do not effectively handle the huge number of viral infections that occur in children in an urban population – the immune system, including the tonsils and adenoids, developed during a era where the child was rarely exposed to a large number of other people and the germs they carried.

It may also be that the tonsils and adenoids are relatively more important in dealing with certain types of infections, such as worms or other parasites that are relatively uncommon in today’s society.

It is clear that the immune system may improve after diseased tonsils and adenoids are removed.

Tonsil and adenoid surgery – why are the tonsils and adenoids removed?

The most common reasons to remove the tonsils and adenoids include:

Sleep disordered breathing in children is often caused by enlargement of the tonsils and adenoids. The child sleeps with the mouth open and the head bent back and snores – often the child’s breathing has stops or pauses followed by snorting.

Other symptoms include bedwetting, slow growth, headache, irritability, poor concentration and misbehaviour. Big tonsils can also cause difficulty with eating and drinking in children.

Sleep disordered breathing caused by enlargement of the tonsils and adenoids is an indication for tonsil and adenoid surgery.

Tonsillitis is an inflammation of the tonsils caused by infection and the adenoids are often infected at the same time. Viruses are the commonest cause of tonsillitis but often bacteria are also involved – it is may not be possible to tell the difference between viral and bacterial tonsillitis.

Symptoms of tonsillitis include a sore throat, difficulty with eating and drinking and loss of appetite, bad breath, fever, swollen neck glands, and generally feeling irritable and unwell. During episodes of tonsillitis the tonsils will become swollen and red often with debris on the surface/ Tonsillitis due to glandular fever often occurs in teenagers and can be severe with huge tonsil and adenoid swelling. The neck glands are also swollen. Partial blockage of the throat can develop leading to problems breathing, eating and drinking.

Quinsy is a severe throat infection (abscess) between the tonsil and the tonsil socket which requires urgent attention by an ENT specialist. Progressively worsening unilateral sore throat and pain during swallowing usually are the earliest symptoms. As the abscess develops, symptoms include persistent pain in the tonsil area, fever, headache and a “hot potato voice”.

Neck pain associated with tender, swollen lymph nodes, referred ear pain and halitosis are also common. A quinsy should be specifically considered if there is limited ability to open the mouth (trismus).

Tonsil stones, also known as tonsilloliths, are clusters of calcified material that forms in the crevasses of the tonsils. Tonsil stones are a common cause of bad breath (halitosis). Tonsil removal (tonsillectomy) may be needed to cure bad breath due to tonsil stones.

The tonsils are filled with pits where bacteria and other materials, including food particles can become trapped. When this happens, the debris can become concentrated in white formations that occur in the pits.

Tonsil stones, or tonsilloliths, are formed when this trapped debris hardens, or calcifies. This tends to happen most often in people who have chronic tonsillitis.

Many people have small tonsilloliths that develop in their tonsils.

Surgical removal of the tonsils and adenoids

The tonsils are removed from their sockets and in most cases can be removed with very little bleeding. An overnight hospital stay is required for recovery after tonsil and adenoid removal.

After tonsil and adenoid surgery it is very important to re-establish eating and drinking as soon as possible – the longer the delay before eating and drinking the more discomfort there will be. Fluids are essential – start with ice chips, sips of water or your favourite juice drink, and progress to at least a 250mL glass of drink.

Bleeding after leaving hospital is rare but may occur up to 10 days after tonsillectomy. Persistent spitting or vomiting blood is abnormal – notify you doctor. Drink plenty of fluid and chew gum to keep the throat moist.

If you experience bleeding go straight to your nearest Emergency Department. Gargling with cold water or with 1% hydrogen peroxide may help bring bleeding under control.

Pain after tonsil and adenoid surgery

A sore throat after tonsil and adenoid surgery is common and will limit chewing – you may also experience referred ear pain. It is not unusual for your throat to become more painful on the 4th or 5th day after the operation. A good pain relief is to eat or drink and chew more – cooler foods may be soothing, for example, cold drinks and ice cream – chewing gum is also soothing.

Take pain medication as prescribed every 4 to 6 hours as needed – Do not take aspirin, aspirin products or NSAIDs like Nurofen for pain relief as this may increase the risk of bleeding.

Eating and drinking will be easier around 30 minutes after taking pain medication.

Generally your follow-up will consist of: