Blog > Bony Anatomy of the Neck

Anatomically, the neck is the region between the base of the skull and the clavicles (collar bones) that connects the head to the trunk. It contains several important blood vessels, nerves and organs. The neck also has a number of muscles and bones which help to support and protect these structures. 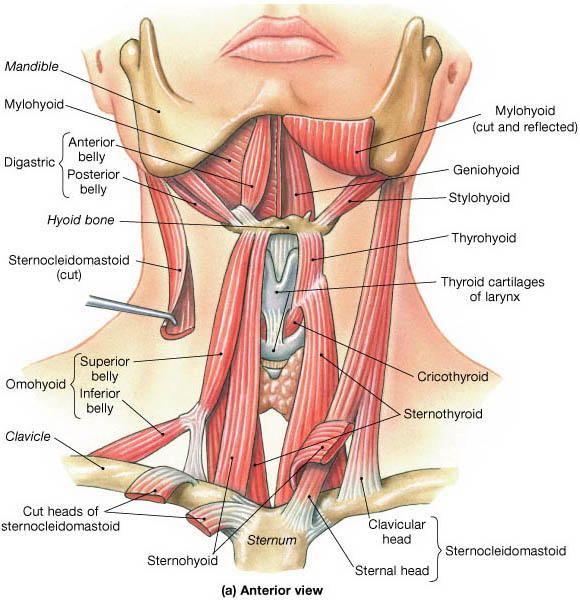 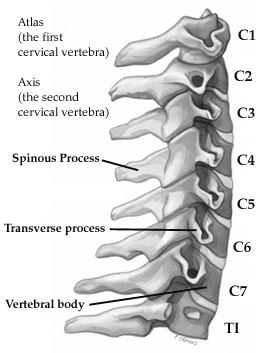 Vertebrae C3-6 all share similar features and are deemed to be typical vertebrae. The key features of these vertebrae include:

Spinous Processes: the spinous process is a projection off the vertebra which faces posteriorly (i.e. towards the back). The spinous processes are the “bumps” which you can see often seen on the back and neck of individuals. In the cervical region, these are short (with the exception of C6 and C7) and are sometimes bifid (split into two).

C1 (Atlas): C1 is a particularly unusual vertebra in that it does not have a body or a spinous process. Instead, it has anterior and posterior arches, which both have tubercules. The lateral parts of C1 are called lateral masses, which are the thickest part of the vertebrae and are involved in bearing the weight of the head. The superior surfaces of the lateral masses articulate with the occipital condyles on the base of the skull. The transverse processes of C1 arise from the lateral masses. As with the other cervical vertebrae, the transverse processes of C1 possess transverse foramina. Another feature unique to C1 is the transverse ligament, a structure which attaches to both lateral masses and holds the dens of C2 (discussed below) in place to prevent displacement of the dens into the spinal cord.

C2 (Axis): The most striking feature of C2 is the dens, a process which projects superiorly towards C1. It sits in front of the spinal cord. The dens is an important anatomical feature because it allows us to rotate our heads; it acts like a pivot. It articulates with a facet on C1 and is supported posteriorly by the transverse ligament. C2 also has prominent facets on the superior surface which articulate with C1.

C7 (Vertebra Prominens): C7 has a much longer spinous process than the typical cervical vertebrae, and often stands out as a prominent bump at the base of one’s neck when looking at someone from behind. In addition, in C7, the foramina are small or absent. When present, the C7 foramina do not transmit the vertebral arteries; instead, they only carry small accessory veins. The hyoid bone is the only bone in the human body which does not directly articulate with any other bone. However; it does not merely float; there are strong muscles and ligaments which attach the hyoid to various other structures in the head and neck, including the scapulae (shoulder blades), manubrium, mandible (jaw), styloid process (part of the skull near the ear) and the thyroid cartilage of the larynx. Functionally, the hyoid is a very important bone because it helps to keep the airway open, and also serves as the attachment site for many of the neck muscles.

Clavicle: The clavicle is colloquially referred to as the collar bone. It is a bone that is slightly curved into an S-shape and connects the upper limb to the trunk. The clavicle articulates with the manubrium at the clavicular notch. It joins to the shoulder girdle via an articulation with the acromion process of the scapula. The clavicle is important for the biomechanics of the shoulder and serves as a site of attachment for numerous muscles and blood vessels.