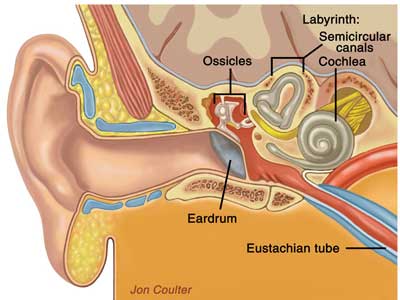 Labyrinthitis is an infection of the inner ear. Like most other ear infections, it can cause a vast array of painful and debilitating symptoms. An inner ear infection often starts out with the feeling of extreme vertigo, like the room is spinning or moving around very slowly.

Severe headaches and memory loss also often accompany this type of infection, along with temporary hearing loss, trouble balancing, difficultly focusing and nausea with vomiting. Other symptoms may include a sore throat, flu-like illness or a cold.

Although this kind of infection can last up to a few months at a time, the normal duration is between several days and a couple of weeks. The treatment for it is not standard but rather it varies from physician to physician. Some doctors will prescribe anti-nausea and vertigo medications, while others will simply suggest plenty of rest and hydration; it depends mostly on the severity of the case.

Inner ear infection cause and effect

Labyrinthitis and vestibular neuritis are most commonly caused by a viral infection that affects the inner ear. These conditions typically cause vertigo (intense dizziness, often with vomiting). In most cases the symptoms gradually ease and go within a few weeks as the infection clears. Medication aims to alleviate the symptoms.

About vestibular neuritis and labyrinthitis

Strictly speaking, ‘itis’ at the end of a word means inflammation. These names used to be used interchangeably but are now used more specifically:

Labyrinthitis is a condition that is due to inflammation of the labyrinth in the inner ear, although sometimes the vestibular nerve is also involved.

There is no specific known cause for Labyrinthitis, though there are many factors that could possibly raise the risk of such an infection. Some of these risk factors are smoking, fatigue, allergies, consuming large amounts of alcohol, a history of serious ear infections, a recent respiratory infection and even the use of certain medications.

Because no one knows specifically what causes the onset of inner ear infections, there is not a sure-fire way to avoid them. However, eating well, exercising regularly, getting plenty of rest, and avoiding habits such as smoking and drinking may reduce the risk or impact of severe infection.

If someone is diagnosed with an inner ear infection, they are definitely not in a life-threatening situation. Though it can feel like the end of the world when suffering from such an infection, in most cases, a person will go back to feeling normal within a short time.

However, that is not to say that an infection of this sort cannot cause lasting damage and effects. Sometimes, if the infection is bad enough, the eardrum or other sensitive parts of the ear can be greatly harmed, thus leaving a person with restricted hearing or even complete hearing loss, though this is a rare occasion.

In most instances, people with inner ear infections will recover normally, but others may need to be admitted to the hospital for a few days, especially if they are not able to eat or drink properly. Often with these kinds of infections, people will suffer extreme bouts of vomiting due to the pain they are experiencing. If this is true, these individuals will most likely need to be monitored closely to make sure they are receiving enough nutrition and remaining properly hydrated.

If you have questions about labyrinthitis or inner ear infection make an appointment to see an ear nose and throat specialist.