Blog > What Is Otitis Media? 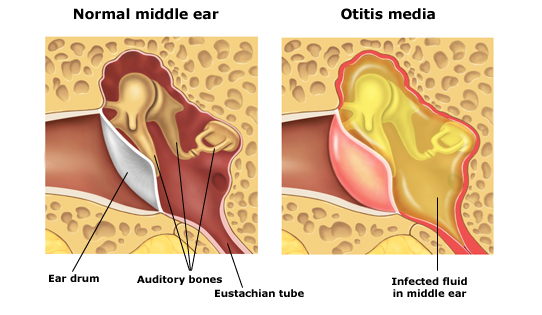 Otitis media is an infection of the middle ear. Specifically, the middle ear is the area between the inner ear and the tympanic membrane. Middle ear infection is one of the most common causes of an earache. This type of infection can be either acute or chronic, and sometimes, the ear drum ruptures, causing fluid to drain into the ear canal. This actually causes the patient to experience some relief from the pressure and pain associated with this type of infection, but if the drainage persists for more than two weeks, the condition is considered chronic. Fortunately, the ear drum almost always heals.

Normally, otitis media occurs after a cold. Kids that are less than seven years old are particularly prone to it, primarily because their resistance to viruses and bacteria isn’t yet as developed as it is in the adult population. Interestingly, breastfeeding a child for the first year of its life has been shown to dramatically reduce the number of occurrences of ear infections in that child. It is most often diagnosed with a simple visual examination. Treatment recommendations will vary on the basis of whether the otitis media (ear infection) is acute or chronic, and whether it is viral or bacterial.

Acute ear infections are most often viral, and they usually accompany upper respiratory infections. Since they’re usually viral, they’re usually also self-limited. Bacterial cases are usually accompanied by both earaches and fevers. When an acute middle ear infection is first diagnosed, it is quite common to delay the prescription of antibiotics, both because of their side effects and because of the fact that most children recover adequately from ear infections without the use of antibiotics. It is still important to see a doctor, though, because if an ear infection is bacterial, and it is left untreated long enough, it could be very dangerous.